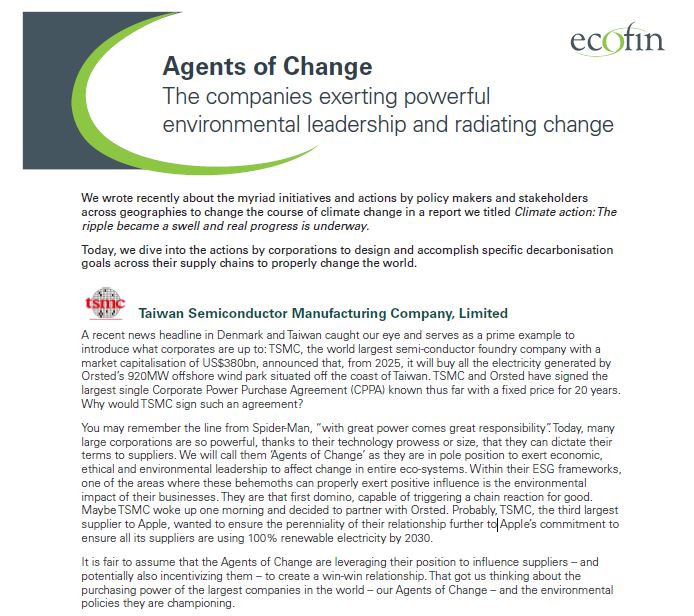 We wrote recently about the myriad initiatives and actions by policy makers and stakeholders across geographies to change the course of climate change in a report we titled Climate action: The ripple became a swell and real progress is underway.

Today, we dive into the actions by corporations to design and accomplish specific decarbonisation goals across their supply chains to properly change the world.

A recent news headline in Denmark and Taiwan caught our eye and serves as a prime example to introduce what corporates are up to: TSMC, the world largest semi-conductor foundry company with a market capitalisation of US$380bn, announced that, from 2025, it will buy all the electricity generated by Orsted’s 920MW offshore wind park situated off the coast of Taiwan. TSMC and Orsted have signed the largest single Corporate Power Purchase Agreement (CPPA) known thus far with a fixed price for 20 years. Why would TSMC sign such an agreement?

You may remember the line from Spider-Man, “with great power comes great responsibility”. Today, many large corporations are so powerful, thanks to their technology prowess or size, that they can dictate their terms to suppliers. We will call them ‘Agents of Change’ as they are in pole position to exert economic, ethical and environmental leadership to affect change in entire eco-systems. Within their ESG frameworks, one of the areas where these behemoths can properly exert positive influence is the environmental impact of their businesses. They are that first domino, capable of triggering a chain reaction for good. Maybe TSMC woke up one morning and decided to partner with Orsted. Probably, TSMC, the third largest supplier to Apple, wanted to ensure the perenniality of their relationship further to Apple’s commitment to ensure all its suppliers are using 100% renewable electricity by 2030.

It is fair to assume that the Agents of Change are leveraging their position to influence suppliers – and potentially also incentivizing them – to create a win-win relationship. That got us thinking about the purchasing power of the largest companies in the world – our Agents of Change – and the environmental policies they are championing.

1Source: Bloomberg, 16 September 2020. Cost of revenues is the total cost of manufacturing (traditional cost of goods sold) and delivering (selling, marketing and distribution) a product or service to customers.

The 10 largest global companies by cost of revenues (excluding O&G and Healthcare) – we use cost of revenues as a proxy for purchasing power – spend in aggregate the equivalent of 2% of global GDP. Their combined spending power makes them the 8th largest economy in the world, on par with Italy. It is fair to ask, therefore, who has more global economic power, these ten Agents of Change or Italy?

When we think about the decision-making processes at the highest levels of government, the management of country-to-country relationships and of various groups with diverging objectives, authorities’ influence on partners tends to be slow and can be limited. Our Agents of Change, on the other hand, can cut through the red tape and lay out clearly for existing and potential partners/suppliers their conditions for doing business. Apple’s CEO or top management team can decide at a meeting to only work with zero-carbon partners by 2030 and soon enough TSMC will oblige. It is fair to expect these suppliers to play the same role with their own supply chains, thereby radiating positive change through their eco-systems. As each of these mega Agents of Change has, on average, over 100 suppliers, a decision emanating from one Agent and spreading three steps down the supply chain could convert 1mn businesses.

So, what are these Agents of Change doing with all that power? It seems they have followed a similar pattern in terms of embracing a climate policy. They generally started by making genuine improvements internally to reduce direct or Scope 1 emissions, and have moved on to upgrading the climate impact of their extended eco-systems by reducing indirect (Scope 2 and 3) emissions by migrating to the use of renewable sources of electricity and making supplies and products carbon neutral or carbon free.

We present below the environmental objectives of a diverse sample of these Agents of Change: Walmart, Toyota, Amazon, Apple and Daimler. Each has emissions policies that impact their suppliers and we should expect to see many of these suppliers accelerate their adoption of ‘clean’ practices. For each Agent we list their top 10 suppliers, i.e. those with the most at stake, those most highly incentivised to align their policies to the demands of the Agent so as not to be the domino that risks hindering the chain reaction. This is a diverse group of companies in terms of sectors and locations and, therefore, the impact of decisions made at the top of the pyramid can have far-reaching benefits through entire value chains.

All these developments are super encouraging but let’s also remember that the world is quickly exhausting the 1.5°C degrees ‘warming budget’ that nations signed up to as part of their Paris Agreement commitments in 2015.

Walmart’s emissions-reduction plan has been approved by Science Based Targets (a joint initiative of CDP, the UN Global Compact, the World Resources Institute and WWF), meaning that its energy-specific targets are indeed ‘science-based’ and in alignment with the level of decarbonisation required to keep the global temperature increase below 2°C compared to pre-industrial levels, per the 2015 Paris Climate Agreement.

Toyota is embracing a broad reaching and very ambitious ‘Challenge of Achieving Zero’ by 2050 which seeks, as far as possible, to:

On the road to those goals, Toyota has set specific 2025 targets for emissions too:

Amazon, together with Global Optimism, has established The Climate Pledge, a commitment to reach net zero carbon – by deploying renewable energy, investing in sustainable buildings and mobilising supply chains – by 2040, fully ten years earlier than the climate crisis mitigation pledges in the Paris Agreement.

Under this umbrella, Amazon has set the following targets:

As an example of the impact of Agents of Change, Mercedes-Benz has signed The Climate Pledge and…Amazon is purchasing 1,800 electric delivery vehicles from Mercedes-Benz.

Apple is already carbon neutral and plans to make all its products carbon neutral by 2030. To accomplish this, products will be made entirely with clean energy by 2030, therefore migrating all suppliers to 100% renewable electricity (today, about half of Apple’s carbon footprint is from the electricity used in manufacturing). So far, 72 manufacturing partners in 17 different countries have committed to 100% renewable energy for Apple production, and Apple’s stores, offices, and data centres are powered 100% by renewable electricity.

In 2019, Daimler introduced ‘Ambition 2039’, its path to sustainable mobility and plans for the company’s new vehicle fleet (new cars throughout the entire life cycle worldwide; new trucks and buses in operation in Europe, Japan and NAFTA) to be CO2 neutral by 2039. Daimler has been working with its suppliers in a collaborative way and we wouldn’t be surprised to see clear targets for its value chain in the near-term. Moreover, Daimler has set the following targets at the corporate level:

Ecofin Investments, LLC is the parent of registered investment advisers Ecofin Advisors, LLC, which is regulated by the Securities and Exchange Commission, and Ecofin Advisors Limited, which is regulated by the Financial Conduct Authority and registered with the Securities and Exchange Commission, (collectively known as “Ecofin”).