A Roadmap to COP26

Climate Action 10/26/2021
The 26th Conference of Parties (COP26) is starting on the 31st October until 12th November in Glasgow. It is the most influential climate summit with the ambition to coordinate international efforts to achieve Net Zero targets with the goal of completely negating the amount of greenhouse gases (GHG) produced by human activity, to be achieved by reducing emissions and implementing methods of absorbing CO2 from the atmosphere. Delegates from more than 190 countries will participate to review and negotiate climate plans.
Download as PDF 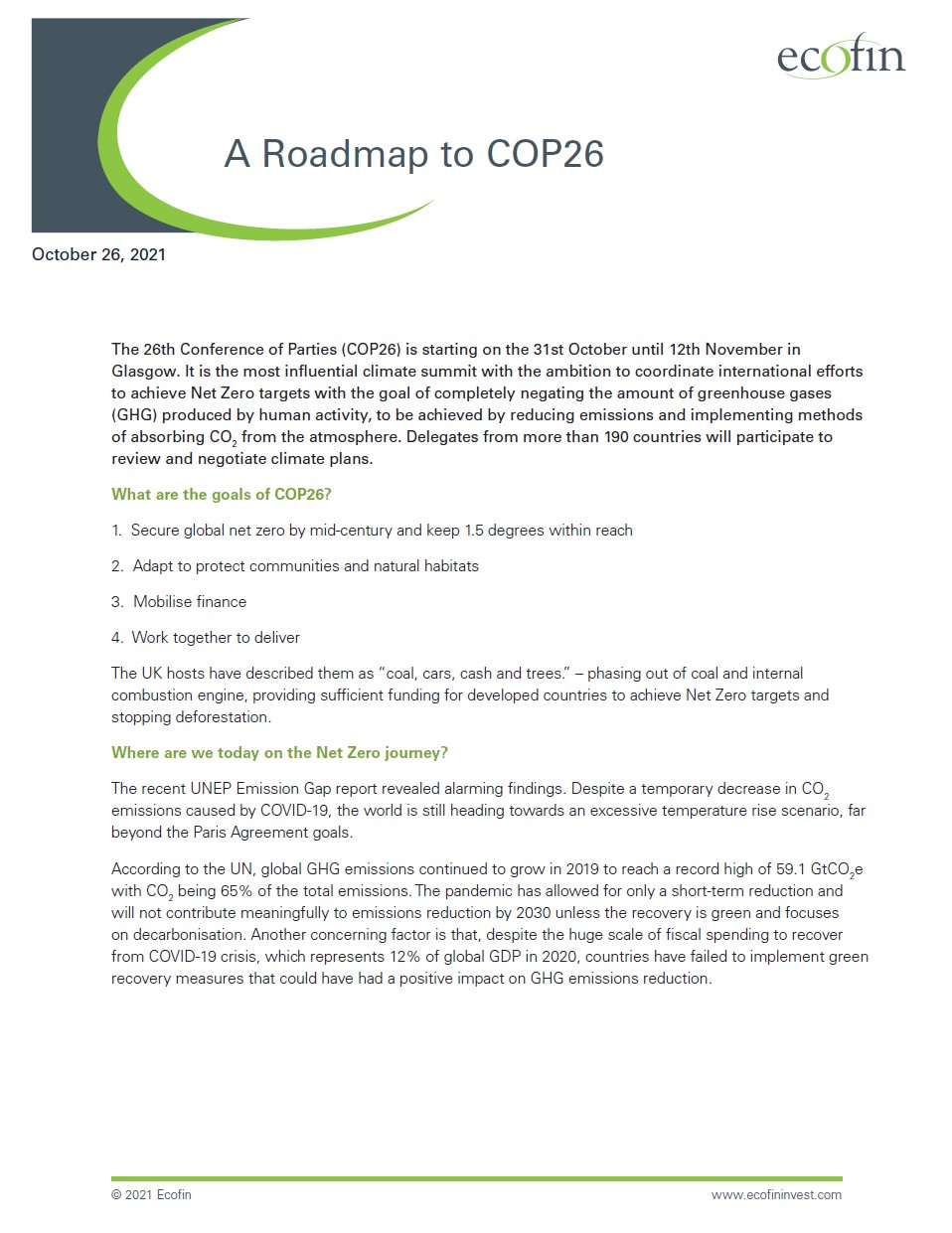 What are the goals of COP26?

The UK hosts have described them as “coal, cars, cash and trees.” – phasing out of coal and internal combustion engine, providing sufficient funding for developed countries to achieve Net Zero targets and stopping deforestation.

Where are we today on the Net Zero journey?

The recent UNEP Emission Gap report revealed alarming findings. Despite a temporary decrease in CO2 emissions caused by COVID-19, the world is still heading towards an excessive temperature rise scenario, far beyond the Paris Agreement goals.

According to the UN, global GHG emissions continued to grow in 2019 to reach a record high of 59.1 GtCO2e with CO2 being 65% of the total emissions. The pandemic has allowed for only a short-term reduction and will not contribute meaningfully to emissions reduction by 2030 unless the recovery is green and focuses on decarbonisation. Another concerning factor is that, despite the huge scale of fiscal spending to recover from Covid-19 crisis, which represents 12% of global GDP in 2020, countries have failed to implement green recovery measures that could have had a positive impact on GHG emissions reduction.

Who are the biggest polluters?

The chart below shows the absolute emissions numbers of the top five emitters in the world. Many of the Organisation for Economic Co-operation and Development (OECD) countries have peaked in terms of GHG emissions and are starting to focus more on energy efficiency. However, countries with strong growth in energy use to fuel economic growth have seen increasing emissions.

Source: Our World in Data

As G20 members are responsible for 75% of global GHG emissions, they need to not only urgently deliver their own climate ambitions, but also fund climate policies in developing countries. Only a few members are on track to achieve their NDC commitments. As of October, the biggest polluters, including China and India, have not officially submitted their updated Nationally Determined Contributions (NDCs). Other countries including Australia and Brazil have not changed their targets.

Energy remains the largest polluting sector as energy consumption from electricity, heat and transport is responsible for more than 70% of the global GHG. Amongst the different fuel types used to produce energy, coal, gas, and oil are responsible for most CO2 emissions.

Furthermore, reducing GHG emissions would not necessarily imply sacrificing GDP growth, as some might argue. Whether Net Zero ambitions could also drive economic growth has been a major point of discussion. The data from the past two decades show that several countries, including the United States and different European countries, have successfully decoupled their energy-related emissions from economic growth.

What are the different national commitments?

The most updated NDC Synthesis Report from this week confirms the worrying trends highlighted in the previous version. Even taking into consideration all available NDCs, we will still witness a temperature rise of about 2.7°C by the end of the century. All the findings point to the inadequacy and lack of urgency of current policies, hence we expect more countries to review their previous NDCs and submit new targets.

On the 24th of October 2021, the State Council issued the roadmap to achieve peak CO2 by 2030, which has provided new quantitative and qualitative targets and sectoral guidance. President Xi also announced at the UN General Assembly that China would stop building coal plants abroad. It also launched the carbon trading scheme in July.

President Xi has stated that the country will balance growth and sustainability by focusing more on decarbonisation. The recent announcements are positive after a carbon-intensive recovery and recent increase of coal use but the current policy is still insufficient to reach Paris Agreement goals. China would need to neutralise emissions as early as possible before 2060 and it would also need to set more precise and strict domestic targets.

China has been negotiating with the UK and the U.S. on climate commitment before COP26. However, the political tension and the ongoing trade war between China and the U.S. have made conversations tougher. This week, the EU and China are also meeting in London, and we expect discussions to take place around the Carbon Border Adjustment Mechanism. China is currently Europe’s largest trading partner but it has expressed its concerns that this mechanism would violate trade principles.

Carbon targets in NDC (updated in 2021 after rejoining the Paris Agreement):

The administration under President Biden has rejoined the Paris Agreement and stepped up its climate policies and ambitions. The recently announced American Rescue Plan Act also has included several provisions on climate change. Moreover, a second infrastructure bill is underway to be passed. The U.S. Congress is in the process of discussing new legislations and we hope to see progress ahead of COP26. The U.S. does not have a national carbon market currently and it remains unclear whether a carbon tax proposal will be included in the reconciliation bill.

President Biden announced at the UN General Assembly that the U.S. would double its funding to help developing countries in fighting climate change. Furthermore, it has been urging countries such as China and India to update their climate targets. We expect the U.S. to continue negotiating with China to coordinate climate efforts as they are the top emitters in the world.

Europe has been the leader in climate change policies and has been focusing on a green recovery from COVID-19 with its Green Deal. It released a Fit-for-55 package in July providing more details on how to reach climate neutrality. These include tightening carbon allowances, broadening scope of ETS to include more sectors and energy taxation directives. Europe is also at the forefront of Sustainable Finance with SFDR, EU Taxonomy and CSRD to provide a comprehensive framework to sustainable investing. Nonetheless, Europe would need to ensure climate policies including coal phase-out are implemented in a timely manner at member state level. This week, the member states are meeting to discuss about reforming the energy market with a big divide between two blocks. Europe will need to make sure any short-term manoeuvres do not compromise the climate neutrality goal.

We expect Europe, together with the UK, to lead some discussions at COP26 and exert further pressure on other countries to step up their funding.

What is the outlook for carbon markets?

Carbon pricing at a sufficiently high level is one of the climate change pillars. Art 6 of the Paris Agreement, with the ambition to set a global carbon trading mechanism, will be a fundamental discussion in relation to international cooperation on climate efforts. According to World Bank data, currently there are 64 carbon pricing initiatives around 45 national jurisdictions and they cover 11.65 GtCO2e, representing 21.5% of global GHG emissions.

EU Emission Trading Scheme (ETS) is among the largest carbon markets in the world, which covers around 40-45% of the EU’s total GHG emissions and it is expanding its scope. Recently we have seen a spike in carbon prices, mainly due to the current energy crisis and new developments of the EU Green Deal including “Fit for 55” package. Nonetheless, the data from Bloomberg New Energy Finance (BNEF) on European Union Allowances (EUA) price in comparison to Northwest Europe carbon fuel-switching price range show that we are still far from the price level which would encourage a wider switch from coal to natural gas.

China launched its national carbon trading market in July. Similar to the EU ETS, it is a cap-and-trade model, which means companies emitting more than allowed will have to buy carbon credits. The carbon price has been trading around $7.88-$8.76/mt but is expected to increase as China’s current price is among the lowest in the world and the demand for carbon credit will increase, especially after the recent announcement of climate targets.

A harmonised international carbon trading mechanism will be challenging to reach a consensus at COP26 mainly due to different political interests and the current trade tensions. Voluntary market will continue to grow its role in the international decarbonisation process, especially with more and more companies pledging net zero and therefore buying more offsets. The economist Stiglitz’s recent paper on carbon pricing is warning governments that the current price is not reflective of social cost. We expect more guidance on international carbon markets as part of trade discussions.

We look forward to sharing more of our insights throughout the conference.