Climate Action 5/17/2021
How to consider carbon, trade and energy independence in the context of energy transition and ESG frameworks.
Download as PDF 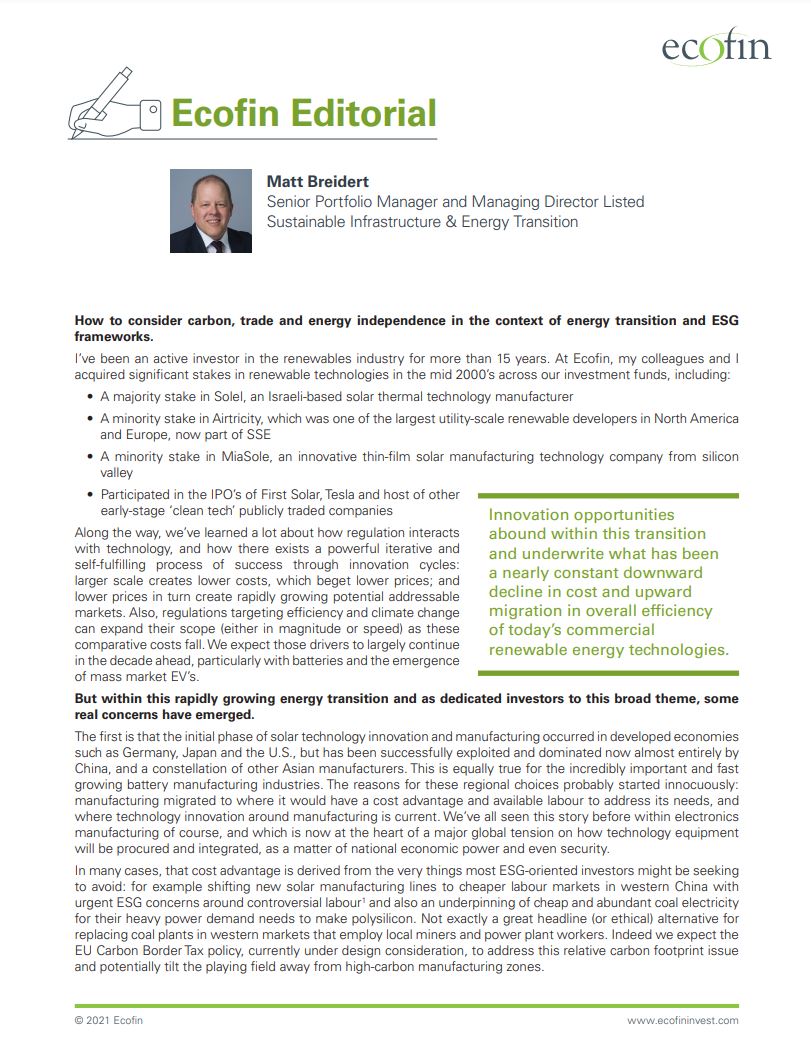 How to consider carbon, trade and energy independence in the context of energy transition and ESG frameworks.

I’ve been an active investor in the renewables industry for more than 15 years. At Ecofin, my colleagues and I acquired significant stakes in renewable technologies in the mid 2000’s across our investment funds, including:

Along the way, we’ve learned a lot about how regulation interacts with technology, and how there exists a powerful iterative and self-fulfilling process of success through innovation cycles: larger scale creates lower costs, which beget lower prices; and lower prices in turn create rapidly growing potential addressable markets. Also, regulations targeting efficiency and climate change can expand their scope (either in magnitude or speed) as these comparative costs fall. We expect those drivers to largely continue in the decade ahead, particularly with batteries and the emergence of mass market EV’s.

Innovation opportunities abound within this transition and underwrite what has been a nearly constant downward decline in cost and upward migration in overall efficiency of today’s commercial renewable energy technologies.

But within this rapidly growing energy transition and as dedicated investors to this broad theme, some real concerns have emerged.

The first is that the initial phase of solar technology innovation and manufacturing occurred in developed economies such as Germany, Japan and the U.S., but has been successfully exploited and dominated now almost entirely by China, and a constellation of other Asian manufacturers. This is equally true for the incredibly important and fast growing battery manufacturing industries. The reasons for these regional choices probably started innocuously: manufacturing migrated to where it would have a cost advantage and available labour to address its needs, and where technology innovation around manufacturing is current. We’ve all seen this story before within electronics manufacturing of course, and which is now at the heart of a major global tension on how technology equipment will be procured and integrated, as a matter of national economic power and even security.

In many cases, that cost advantage is derived from the very things most ESG-oriented investors might be seeking to avoid: for example shifting new solar manufacturing lines to cheaper labour markets in western China with urgent ESG concerns around controversial labour1 and also an underpinning of cheap and abundant coal electricity for their heavy power demand needs to make polysilicon. Not exactly a great headline (or ethical) alternative for replacing coal plants in western markets that employ local miners and power plant workers. Indeed we expect the EU Carbon Border Tax policy, currently under design consideration, to address this relative carbon footprint issue and potentially tilt the playing field away from high-carbon manufacturing zones.

Equally, it is also unrealistic—and indeed will further destabilise—developed economies to shift what amounts today to largely domestic GDP+ activities of power generation (where production and consumption get double credit), to a model of GDP negative external imports on solar and battery equipment and with extremely low localised labour content for ongoing operations of these technologies. Energy independence is a generally worthy goal for all nations and indeed switching to renewables—even with imported equipment—is substantially more GDP positive than an alternative of importing oil for power as say Hawaii has been doing. But its also a wasted opportunity to cede broader national participation in the process simply in the name of unfettered or potentially questionable ‘free trade’. Said another way, it is imperative that through thoughtful regulation and investor engagement, that we would inadvertently avoid concentrating energy transition wealth into the hands of only a few countries—particularly if those regions have asymmetry on major ESG issues like allowing auditors to conduct their business with transparency. We can all agree that the caustic narrative around renewable energy vs coal in the U.S. was politically exploited in way that has led to resistance to greater momentum on the climate change issue, at a time of true urgency. Ignoring the ‘losers’ on energy transition, or worse, not cultivating more localised national/regional participation has the potential to plant seeds of real policy danger ahead. And this should be a serious ESG consideration for investors.

The concern we as investors have now is that it seems somewhat unrealistic to us that developed economies should make this multi-decade commitment to decarbonisation and be expected to send tens or eventually hundreds of billions of its dollars, euros and other local currencies out the door simply because an Asian manufacturer is willing to take as little as a penny less per watt.

So on these issues, we intend now to engage with all major renewable developers on the matters of component procurement:

We are very much supportive of Xi Xingping’s recent surprise announcement that China would pursue carbon neutrality by 2060, it is a watershed moment for the country and world. Nevertheless we are a bit circumspect about its origins: it is likely that the leadership of China are only finally starting to turn their policy on containing carbon emissions domestically and within its Belt and Road framework because of policies and investor engagements coming from developed markets like the EU, requiring tighter and tighter measurements of carbon footprinting. Indeed we believe the Biden administration will likely synchronise around this framework, creating significant inertia in this effort to recalibrate global trade, adjusting for carbon footprints.

This is perhaps the one of the largest looming ESG and geopolitical risks for this decade.