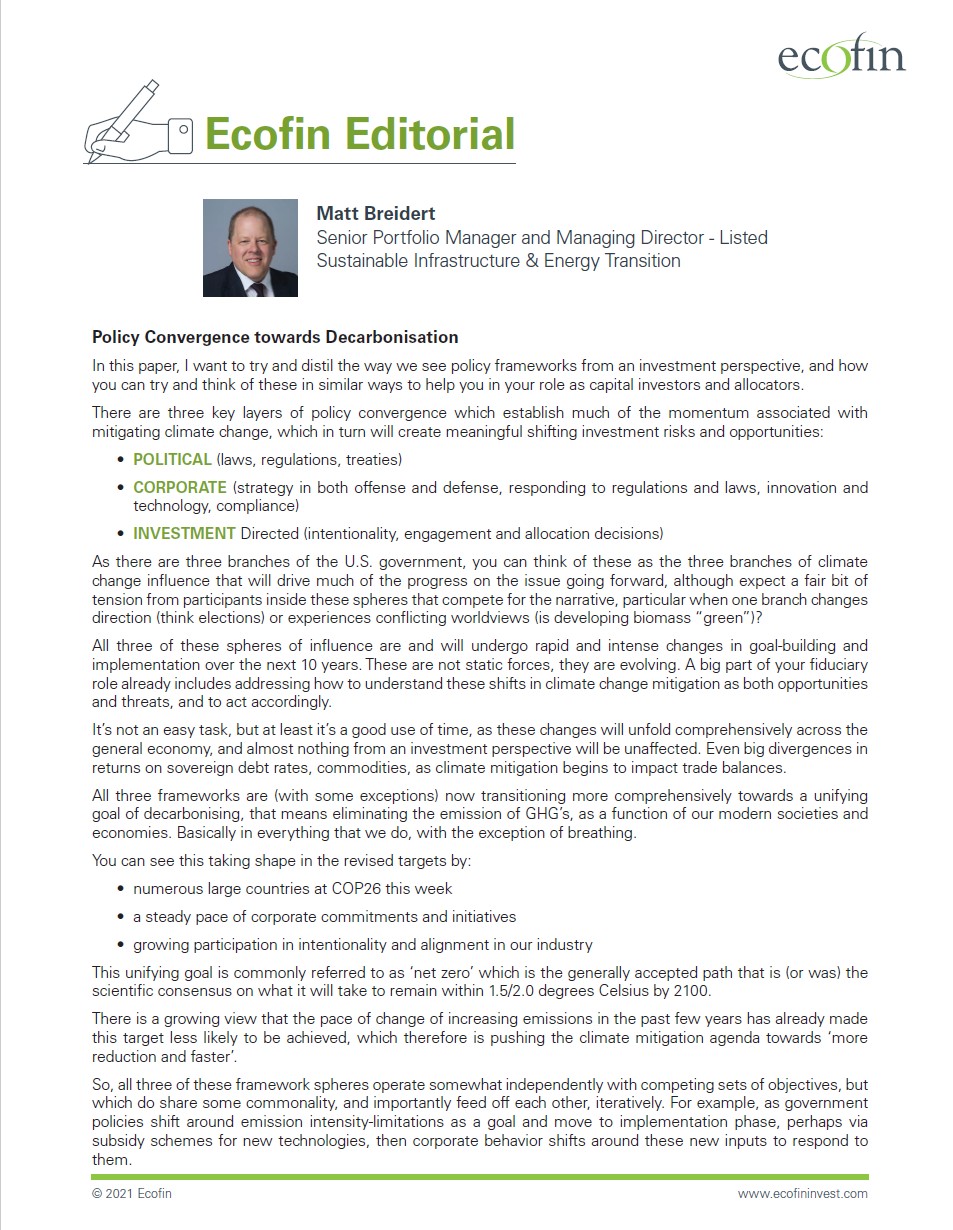 In this paper, I want to try and distil the way we see policy frameworks from an investment perspective, and how you can try and think of these in similar ways to help you in your role as capital investors and allocators.

There are three key players of policy convergence which establish much of the momentum associated with mitigating climate change, which in turn will create meaningful shifting investment risks and opportunities:

As there are three branches of the U.S. government, you can think of these as the three branches of climate change influence that will drive much of the progress on the issue going forward, although expect a fair bit of tension from participants inside these spheres that compete for the narrative, particular when one branch changes direction (think elections) or experiences conflicting worldviews (is developing biomass “green”)?

All three of these spheres of influence are and will undergo rapid and intense changes in goal-building and implementation over the next 10 years. These are not static forces, they are evolving. A big part of your fiduciary role already includes addressing how to understand these shifts in climate change mitigation as both opportunities and threats, and to act accordingly.

It’s not an easy task, but at least it’s a good use of time, as these changes will unfold comprehensively across the general economy, and almost nothing from an investment perspective will be unaffected. Even big divergences in returns on sovereign debt rates, commodities, as climate mitigation begins to impact trade balances.

All three frameworks are (with some exceptions) now transitioning more comprehensively towards a unifying goal of decarbonising, that means eliminating the emission of GHG’s, as a function of our modern societies and economies. Basically in everything that we do, with the exception of breathing.

You can see this taking shape in the revised targets by:

This unifying goal is commonly referred to as ‘net zero’ which is the generally accepted path that is (or was) the scientific consensus on what it will take to remain within 1.5/2.0 degrees Celsius by 2100.

There is a growing view that the pace of change of increasing emissions in the past few years has already made this target less likely to be achieved, which therefore is pushing the climate mitigation agenda towards ‘more reduction and faster’.

So, all three of these framework spheres operate somewhat independently with competing sets of objectives, but which do share some commonality, and importantly feed off each other, iteratively. For example, as government policies shift around emission intensity-limitations as a goal and move to implementation phase, perhaps via subsidy schemes for new technologies, then corporate behavior shifts around these new inputs to respond to them.

That shift then often precipitates strategy formulation and innovation, which results in learning, and which can then influence strategy formulation further and ultimately transform organisations, sometimes radically, as we are seeing with the likes of Volkswagen. Following their efforts to lighten their F-150 platform with a lithiated aluminum frame, which was a response to meeting CAFÉ-A mileage targets, Ford said that they had absolutely no idea you could get aluminum that strong and still work with it, it took a lot of R&D. But once they committed and did it, this returned a new competitive advantage to Ford, they shifted their position in emission targets to promote them, using this as a moat. This is how the sands can shift, quickly.

It is likely that most organisations’ strategies and actions will look very different in 5-10 years related to this topic of climate change mitigation, what it impacts and how you address it, and how those shifts can influence asset performance. We may all be running discounted carbon flow analyses integrated into our DCF’s in the not distant future.

Let’s get into more detail on each of these policy spheres.

Political: National governments around the world are rapidly implementing new decarbonisation goal frameworks with major new action plans. What’s different this time versus the past 10 years is that there is broader political effort (domestically and internationally) with support for addressing these concerns; and equally more legal and regulatory teeth already implemented in regions like the EU which is changing or influencing multi-national objectives.

There is a lot more available and attractively priced technology to lean on to implement these emission reduction changes, that’s somewhat new from even five years ago. Nobody questions whether EV’s will be accepted by the market or can be produced at reasonable costs: Tesla’s biggest concern now is that it can’t produce enough to meet demand. You would have been hard-pressed to find that in a research report on the company five years ago.

And in a sense, as these government regulations in certain jurisdictions kick in, there is a growing realisation of the opportunity for strategic positioning and advancement of other national objectives like economic growth. Surely China’s recent pivot on constraining emissions and addressing climate change relates as much to their desire to remain competitive and eligible to sell-into foreign demand markets (keeping export market share) as with their shared concerns over the instability a more disastrous path of environmental impacts could have disrupting society and their own political legacy.

Corporate: Corporates and their policies are also rapidly shifting into a process of effectively decarbonising their entire value chains as they make individualised pledges to 1.5/2.0 degree standards. In the middle of 2019, less than 75 companies signed on to the original ‘Climate Ambition Alliance’ part of the UN’s COP25 program. By the end of 2019, 177 companies had signed on; today that figure stands at over 600.

More recently, more than 200 companies have also shifted their pledge to net zero carbon by 2040. These are often companies where climate leadership positions in their business model is congruent with a faster path of attainment. As an example, Amazon rapidly shifting their entire ground transportation fleet to EV technology and fueling it all with renewables is of course great for the climate ambition, but it also happens to be great for their bottom line. They can drop the fuel cost of deliveries by over 50% with this shift and reduce longer-term maintenance costs.

Investment: Meanwhile, asset managers and capital allocators and the role of the fiduciary will play a very key role, outside of these conventional governance frameworks. The largest global effort on this front again stems from UN COP framework, the Net Zero Asset Owner Alliance. Many of you will already be a party to this and are by now familiar with the nice pictures of specific Sustainable Development Goals or SDG’s that seek to differentiate objectives within the net-zero framework.

In the EU we have already major regulations addressing how asset managers (and corporates providing data on their operations) consider these Sustainability goals and climate objectives as a core component of regulatory requirements. These include “SFDR”, or Sustainable Financial Disclosure Rules which kicked in earlier this year.

But the most ambitious effort relates to the comprehensive framework of ‘EU Taxonomy’, a regulatory program already under way and designed to basically push managers into high-touch transparency of their emission intensity, ranking their environmental footprints, in a way that creates outputs that reward the ‘decarbonisers’ and not simply businesses that may not have much of a carbon footprint in the first place. Asset managers thusly will be rewarded with ‘taxonomically rich defined portfolio stratgies’ by wading into and investing in some of the higher carbon-intensive industries like mining and auto production, where certain companies are operating way ahead of benchmarks and peers.

As a practitioner on this side of the table, it causes us no small level of frustration when allocators simply run a Scope 1 emission screen and says ‘your investments exceed the index benchmark level of emissions’. EU Taxonomy, and we think in the future, harmonised U.S. regulation of a similar flavour, seek the opposite and in fact even discourage managers from investing in ‘already clean’ or low carbon footprint industries, which has been a form of greenwashing.

Our current economic policies and measurements of success in our existing system look at factors like GDP, which simply don’t take efficiency-led productivity or trade imbalances and resulting foreign capital growth into account enough, or almost at all, and are force feeding consumption levels in sometimes unintended places to make up for deficiencies at home. We would call this a ‘broken computer code’ problem, we’ve built a system designed to seek growth almost at all costs.

We think there are changes coming on this measurement and input side by both the Treasury and the Fed, likely more formally after this budget reconciliation cycle. You can see it in the way Mark Carney, the former head of the BOE is talking, the way the European Development Bank has changed its priorities to only fund 100% non-fossil investments now, financial industry leaders are beginning to realise that basically we cannot have new economic growth with (net) new emissions and expect to achieve a 1.5/2.0 degree objective.

Efforts to shift these measurement goalposts could end up producing larger economic consequences than the market may recognise today. We would look to the issues of 1) carbon footprinting on trade and the potential for re- shoring of significantly more manufacturing, 2) a more holistic shift in product sales cycles to formally include ‘end of life’ (almost like nuclear plants and decommissioning trusts) and 3) a greater emphasis on utility efficiency (everything from airplanes to toasters) to create ‘net zero’ energy demand models while accommodating economic growth and productivity gains (eg “good cholesterol”).

A great example: how do we introduce renewable assets into a deregulated electricity system that uses marginal cost economics as a price discovery mechanism when the resource has almost no marginal cost and is only available part of the time? Modifying market design to accommodate more long-term contracting then facilitates long-term funding, which usually lowers overall cost of service. So our market-driven models may actually be counterproductive in some ways to the changes needed to accommodate new kinds of climate mitigating resources.

Or: How can a company like Unilever produce a finished good today and not include the physical and carbon cost of the consumed product that will be heading to a landfill? The cost of the landfill is a fraction of the full cycle replacement cost, so why aren’t governments forcing that into the price formation today, so that they can use those costs to invest and accelerate circularisation?

We expect many of these issues to be addressed, much like we saw shifts requiring mileage efficiency for automaker fleets.

Policy frameworks in these three “branches of climate change influence” of government, corporates and asset owners are conspiring now to increase momentum around climate change mitigation, that is new from five years ago. We think directionally, this increases in the next 5-10 years.

Major policy framework challenges exist but will increasingly be addressed by all three branches, not ignored or reversed. While there will be competing narratives of the path and speed to accomplish these goals, the inertia of successful applications (think Tesla) will be difficult or even impossible to resist by industry and consumers. Technology innovations that create profit-driven success for the winners will perpetuate further advances by competitors and create an inertia that will be difficult or impossible to stop.