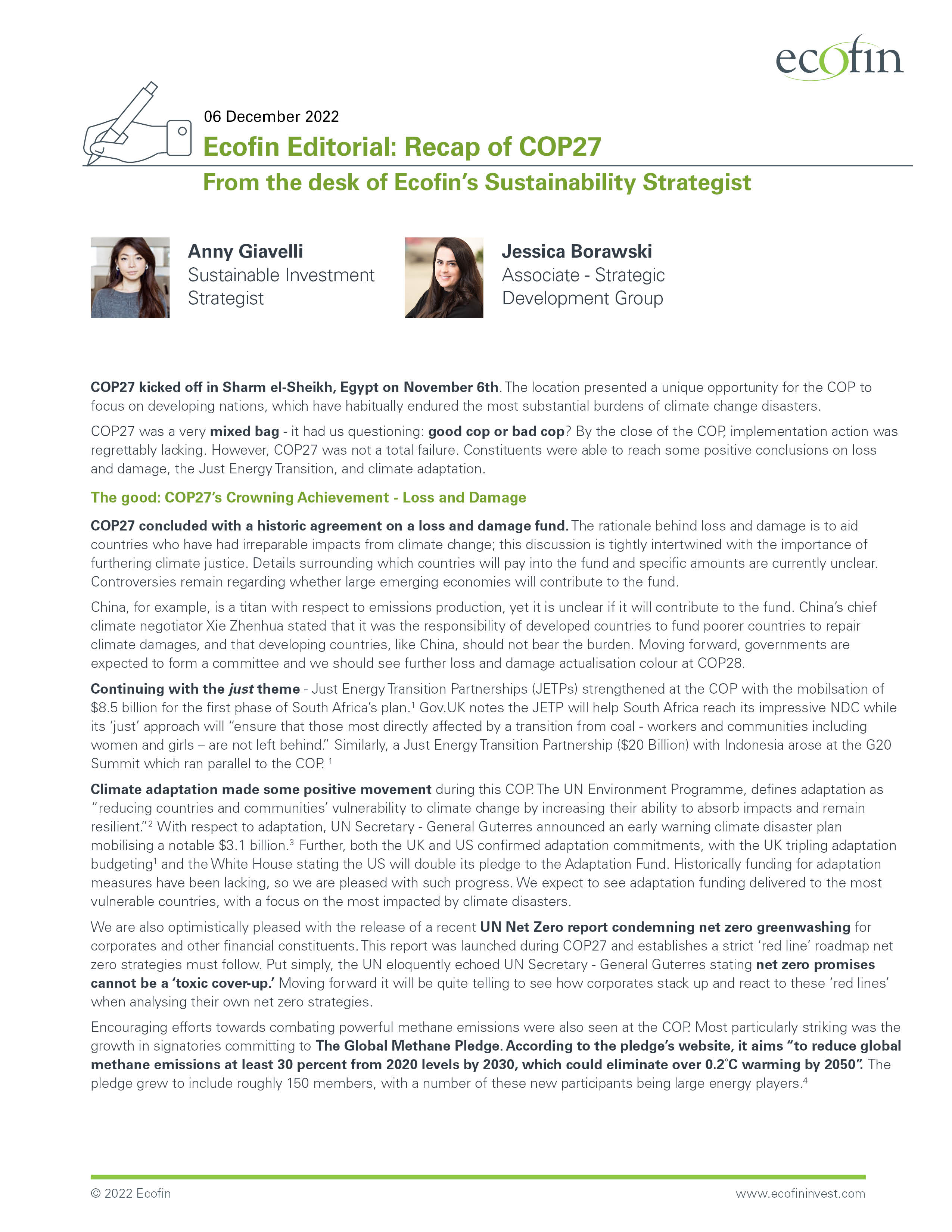 From the desk of Ecofin’s Sustainability Strategist

COP27 kicked off in Sharm el-Sheikh, Egypt on November 6th. The location presented a unique opportunity for the COP to focus on developing nations, which have habitually endured the most substantial burdens of climate change disasters.

COP27 was a very mixed bag - it had us questioning: good cop or bad cop? By the close of the COP, implementation action was regrettably lacking. However, COP27 was not a total failure. Constituents were able to reach some positive conclusions on loss and damage, the Just Energy Transition, and climate adaptation.

COP27 concluded with a historic agreement on a loss and damage fund. The rationale behind loss and damage is to aid countries who have had irreparable impacts from climate change; this discussion is tightly intertwined with the importance of furthering climate justice. Details surrounding which countries will pay into the fund and specific amounts are currently unclear. Controversies remain regarding whether large emerging economies will contribute to the fund.

China, for example, is a titan with respect to emissions production, yet it is unclear if it will contribute to the fund. China’s chief climate negotiator Xie Zhenhua stated that it was the responsibility of developed countries to fund poorer countries to repair climate damages, and that developing countries, like China, should not bear the burden. Moving forward, governments are expected to form a committee and we should see further loss and damage actualisation colour at COP28.

Continuing with the just theme - Just Energy Transition Partnerships (JETPs) strengthened at the COP with the mobilsation of $8.5 billion for the first phase of South Africa’s plan.1 Gov.UK notes the JETP will help South Africa reach its impressive NDC while its ‘just’ approach will “ensure that those most directly affected by a transition from coal - workers and communities including women and girls – are not left behind.” Similarly, a Just Energy Transition Partnership ($20 Billion) with Indonesia arose at the G20 Summit which ran parallel to the COP.1

Climate adaptation made some positive movement during this COP. The UN Environment Programme, defines adaptation as “reducing countries and communities’ vulnerability to climate change by increasing their ability to absorb impacts and remain resilient.”2 With respect to adaptation, UN Secretary - General Guterres announced an early warning climate disaster plan mobilising a notable $3.1 billion.3 Further, both the UK and US confirmed adaptation commitments, with the UK tripling adaptation budgeting1 and the White House stating the US will double its pledge to the Adaptation Fund. Historically funding for adaptation measures have been lacking, so we are pleased with such progress. We expect to see adaptation funding delivered to the most vulnerable countries, with a focus on the most impacted by climate disasters.

We are also optimistically pleased with the release of a recent UN Net Zero report condemning net zero greenwashing for corporates and other financial constituents. This report was launched during COP27 and establishes a strict ‘red line’ roadmap net zero strategies must follow. Put simply, the UN eloquently echoed UN Secretary - General Guterres stating net zero promises cannot be a ‘toxic cover-up.’ Moving forward it will be quite telling to see how corporates stack up and react to these ‘red lines’ when analysing their own net zero strategies.

Encouraging efforts towards combating powerful methane emissions were also seen at the COP. Most particularly striking was the growth in signatories committing to The Global Methane Pledge. According to the pledge’s website, it aims “to reduce global methane emissions at least 30 percent from 2020 levels by 2030, which could eliminate over 0.2˚C warming by 2050”. The pledge grew to include roughly 150 members, with a number of these new participants being large energy players.4

The not-so-good: Unease and Uncertainty

Anyone who attended COP27 could sense the tension and frustration in the air. Uncertainty and unease surrounding the Paris Agreement’s goal of reaching 1.5 degrees was palpable. Vital discussions occurred encompassing whether the goal should be a limit or a target.

Towards the end of the COP, urging action, UN Secretary - General Guterres stated “The 1.5 target is not simply about keeping a goal alive – it’s about keeping people alive. I see the will to keep to the 1.5 goal – but we must ensure that commitment is evident in the COP27 outcome.” The COP’s conclusion supported the 1.5 degree goal however, market participants are still worried it is
in jeopardy.

As ambitions stand, regrettably, only a handful of countries revised Nationally Determined Contributions (NDCs) prior to the COP, and just a few more submitted increased ambitions since. A stark report by Earth System Science Data for 2022 states there is a 50% chance global warming will exceed 1.5 degrees in just nine years. Similarly, Climate Action Tracker illustrates not much progress has been made since Glasgow. The below exhibit demonstrates that we are headed for 2.4 degrees of warming under current government 2030 NDC targets.

The Glasgow NDC update process has failed to deliver the urgent emissions cuts governments promised to deliver to keep warming to 1.5°C. The world is heading for 2.4°C of warming under current 2030 targets. If that number looks familiar, it’s because it is the same as last year. 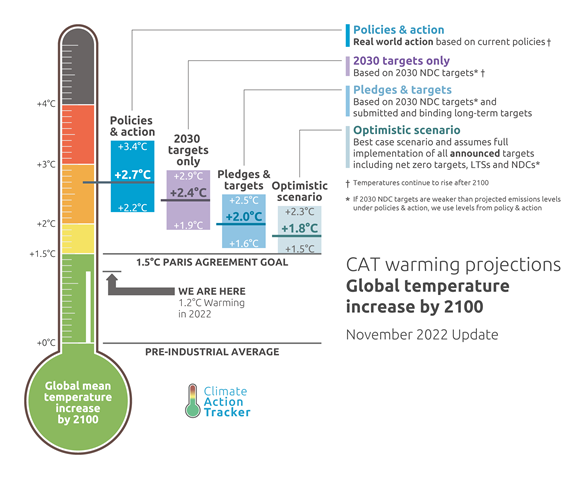 From a climate finance perspective, global financing commitments are vastly deficient. This concept was brazenly highlighted at COP27. Despite the successful establishment of the loss and damage fund, the broader climate reparations conversation continues to be a hotly debated topic. Prior climate finance commitments from developed nations - providing $100 billion a year - have unfortunately not materialised.4 And even further, any new climate funding pledges that have emerged are primarily coming from existing climate finance budget allocations and are therefore not considered new capital.4 Final COP language reacts to these failures and urges for a ‘transformation’ of the entire global financial system, and specifically calls out actors such as MDBs (multilateral development banks) and expresses distress regarding the aforementioned lacking
climate commitments.

Fossil fuel phase down language certainly triggered challenging debates at this year’s COP. The summit took place amidst a difficult geopolitical context: energy crises, inflation worries, war, and more. While final COP language was fortunately supportive of the energy transition in general, it is clear the global energy crisis played an influential role within emissions reduction discussions. Intriguingly, this year’s COP also saw a high level of fossil fuel representatives compared to COP26. Further, various petrostates’ representation was a substantial impediment within fossil fuel phase down discussions. In the end, fossil fuel language was neither enriched nor enhanced and kept within scope to just include coal.

These disappointments illustrate the unfortunate lack of climate mitigation progress made at COP27. While final COP text did not illustrate additional mitigation ambition it did however highlight nature-based solutions.

Renewables will lead the way:

UN Secretary-General opened COP27 with fiery rhetoric commenting that transitioning away from fossil fuels is the only way to get off our rapidly approaching “highway to climate hell.” While this commentary certainly helped set the tone of the summit, we fear overall final COP language did not reflect the UN Chief’s sentiment as ardently. The COP was however effective in viewing renewables ramp up momentum positively.

We are amidst a global transformation toward renewables and other clean energy technologies. The IEA states $4 trillion of clean energy investments is needed across the globe to reach net zero by 2050. This will require a tripling of clean investments. The IEA continues on to note that in 2050 nearly half of the emissions reductions needed will come from technologies that are only just in technological infancy.

Therefore, ramping up clean energy technology is crucial to avoiding the worst and irreversible impacts of climate change. Specifically, clean electricity technologies will transform energy consumption and generation. Renewable electricity will continue to gain market share as coal phases down. Battery storage and green hydrogen will also play an important role in the electrification of our energy system. Finally, The Inflation Reduction Act will be key in catalysing the US’s clean energy transition and its passage has been igniting policy conversations across the globe.

How did COP27 live up to its expectations?

The summit had landmark success with loss and damage funding but fell short with respect to NDCs, mitigation progress, and widespread climate finance initiatives. We are pleased the final COP language is supportive of the overarching energy transition and justice themes, with the loss and damage fund supporting the latter. We believe the Paris Agreement’s 1.5 degree goal is still under threat. We hope the solid collaboration and multilateral coordination across nations seen at both COP27 and the concurrent G20 summit will continue. Similarly, we are given hope as the US and China demonstrate an ability to negotiate on climate talks.

Looking Ahead - Items to Watch:

The next year leading up to COP28 will be a critical indicator on whether we have what it takes to reach Paris Agreement goals. We expect to learn more about who will contribute to the loss and damage fund, and what role China will play. The fund plays into the broader theme of climate reparations which will be an intriguing theme to follow.

The closer we inch towards 2030, the closer we get to potential irreversible climate catastrophe and loss. We must see substantial NDC improvements, financial reform, and policy implementation and actualization across the globe to avoid catastrophic disaster. As the transition accelerates, we expect even more investors to get involved, improved data development and disclosure, enhanced net zero guidance, and further sustainable finance regulation.