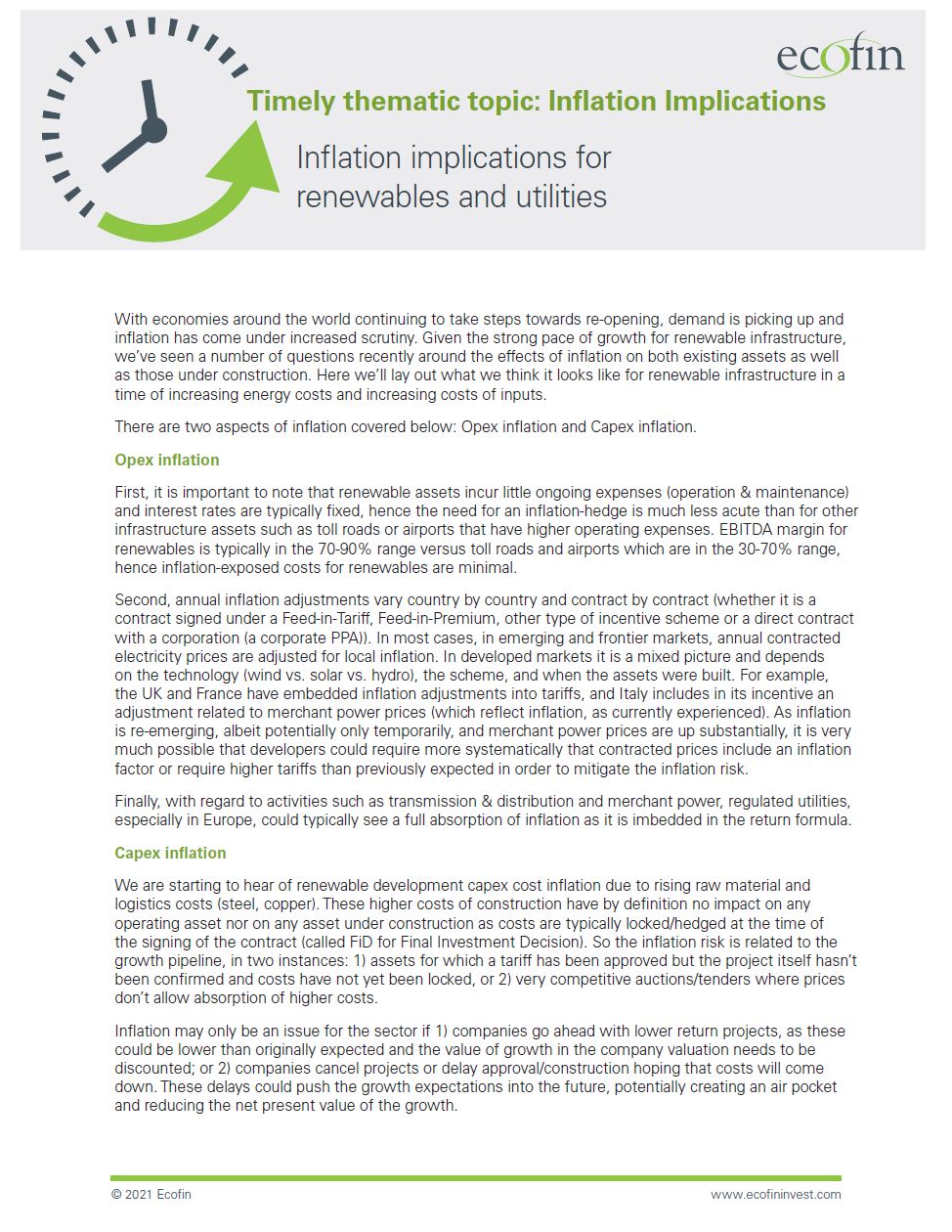 With economies around the world continuing to take steps towards re-opening, demand is picking up and inflation has come under increased scrutiny. Given the strong pace of growth for renewable infrastructure, we’ve seen a number of questions recently around the effects of inflation on both existing assets as well as those under construction. Here we’ll lay out what we think it looks like for renewable infrastructure in a time of increasing energy costs and increasing costs of inputs.

First, it is important to note that renewable assets incur little ongoing expenses (operation & maintenance) and interest rates are typically fixed, hence the need for an inflation-hedge is much less acute than for other infrastructure assets such as toll roads or airports that have higher operating expenses. EBITDA margin for renewables is typically in the 70-90% range versus toll roads and airports which are in the 30-70% range, hence inflation-exposed costs for renewables are minimal.

Second, annual inflation adjustments vary country by country and contract by contract (whether it is a contract signed under a Feed-in-Tariff, Feed-in-Premium, other type of incentive scheme or a direct contract with a corporation (a corporate PPA)). In most cases, in emerging and frontier markets, annual contracted electricity prices are adjusted for local inflation. In developed markets it is a mixed picture and depends on the technology (wind vs. solar vs. hydro), the scheme, and when the assets were built. For example, the UK and France have embedded inflation adjustments into tariffs, and Italy includes in its incentive an adjustment related to merchant power prices (which reflect inflation, as currently experienced). As inflation is re-emerging, albeit potentially only temporarily, and merchant power prices are up substantially, it is very much possible that developers could require more systematically that contracted prices include an inflation factor or require higher tariffs than previously expected in order to mitigate the inflation risk.

Finally, with regard to activities such as transmission & distribution and merchant power, regulated utilities, especially in Europe, could typically see a full absorption of inflation as it is imbedded in the return formula.

We are starting to hear of renewable development capex cost inflation due to rising raw material and logistics costs (steel, copper). These higher costs of construction have by definition no impact on any operating asset nor on any asset under construction as costs are typically locked/hedged at the time of the signing of the contract (called FiD for Final Investment Decision). So the inflation risk is related to the growth pipeline, in two instances: 1) assets for which a tariff has been approved but the project itself hasn’t been confirmed and costs have not yet been locked, or 2) very competitive auctions/tenders where prices don’t allow absorption of higher costs.

Inflation may only be an issue for the sector if 1) companies go ahead with lower return projects, as these could be lower than originally expected and the value of growth in the company valuation needs to be discounted; or 2) companies cancel projects or delay approval/construction hoping that costs will come down. These delays could push the growth expectations into the future, potentially creating an air pocket and reducing the net present value of the growth.

Now, inflation affects all forms of electricity and all forms of energy given where coal, gas, oil prices are compared to a year ago, hence electricity prices on the market (merchant prices) have been rising as well, from +10% year-over-year in the US to +50% year-over-year in France/Germany/UK. In that context, renewables remain the lowest cost producer of electricity and renewables have more room to demand higher prices. Reasons this may not happen is either patience from the offtakers who have no pressing need to add capacity and can wait for prices to subside or irrational competition from renewables developers desperate to fill their pipeline to meet their ambition growth targets. In that context, we believe small developers are more at risk as they are focused on a few markets that might prove unattractive for a while. In conclusion, size and discipline in development will be key.